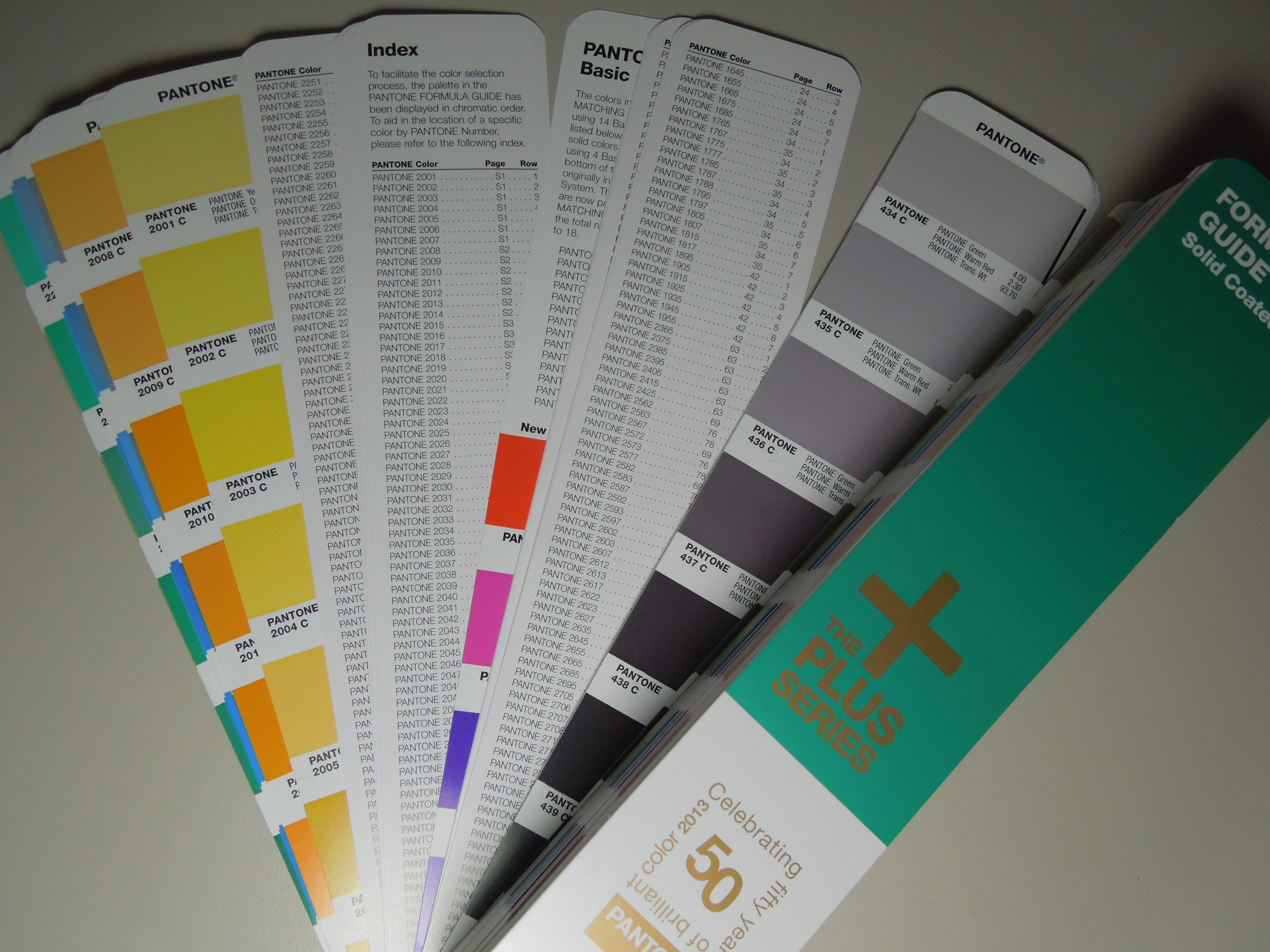 The inscriptions of the different fan editions also only speak of Pantone Plus, but not of the fact that the new 50th Anniversary fan features Pantone Plus colours that are not yet available in the 2010 Pantone Plus fan. For those old fans a supplement was available, which was marked with the imprint “+336”. This supplement is also reflected in the current Pantone 50th Anniversary Fan: it has two tables of contents, one after the other in the fan: First the “old” 1341 colours, then an explanation of the new colours, and then the table of contents of the “new” 336 colours, followed by the colour swatches. So, if you are looking for a Pantone Plus colour in the current fan by the number, you have to read through two tables of contents … and understand this first. Because this is only somewhat logical.

Another problem arises when buying a fan: On ebay two originally packed fan editions are offered simultaneously, which seem to be identical: The old Pantone Plus fan and the new 50th Anniversary fan. Nowhere does it say that the new fan contains 336 more colours. If you accidentally buy the old fan, you’re in for a rude awakening.

The Pantone Plus chaos:
Pantone Plus in InDesign CC? In EFI Colorproof XF? Maybe … or maybe not.

This issue also creates another big problem: The current Adobe Illustrator CC, Indesign CC or Photoshop CC version does not contain all +336 colours like the PANTONE 2004 C. But Adobe stiffly and firmly claims that it would support the Pantone Plus colours. This is true, but only partially. Try selecting a PANTONE 2004 C. You will have little success.

These faults are annoying and unnecessary. Triggered by Pantone’s poor product communication and implemented by Adobe and EFI without further thought, the anger of the users is understandable. Instead of a reliable colour system, Pantone has caused complete chaos with its 50th anniversary. This is a pity and unnecessary.

And the Adobe Cloud? It’s years behind when it comes to Pantone.

The fact that Adobe was not able to implement the missing colours within 18 months, even in the CC version for a monthly fee, is honestly a serious indictment. Adobe itself speaks highly of its support for the Pantone Plus colour palette in Illustrator, Photoshop and InDesign. That may be true, but unfortunately by no means up-to-date. The actuality of the Adobe CC products can’t be worth money, at least when it comes to Pantone.

The announcement was hot: As of March 2022, Adobe software products will no longer contain PANTONE colour libraries. What follows now? Who loses, who wins?

The ISO 12647-7 proofing standard was revised in November 2016 and the test criteria for FograCert contract proof creation were adapted. We have now incorporated these changed criteria into our proofing END_OF_DOCUMENT_TOKEN_TO_BE_REPLACED

Pantone colours can be simulated very well today. T be able in advance to see how well your Pantone colour can be reproduced, we have published tables of all Pantone END_OF_DOCUMENT_TOKEN_TO_BE_REPLACED

Current proofing systems can print spot colours like Pantone or HKS very accurate. With Fiery XF 5.2 Proof software and the Epson 7900/9900 proof printers we evaluated, with which colour END_OF_DOCUMENT_TOKEN_TO_BE_REPLACED